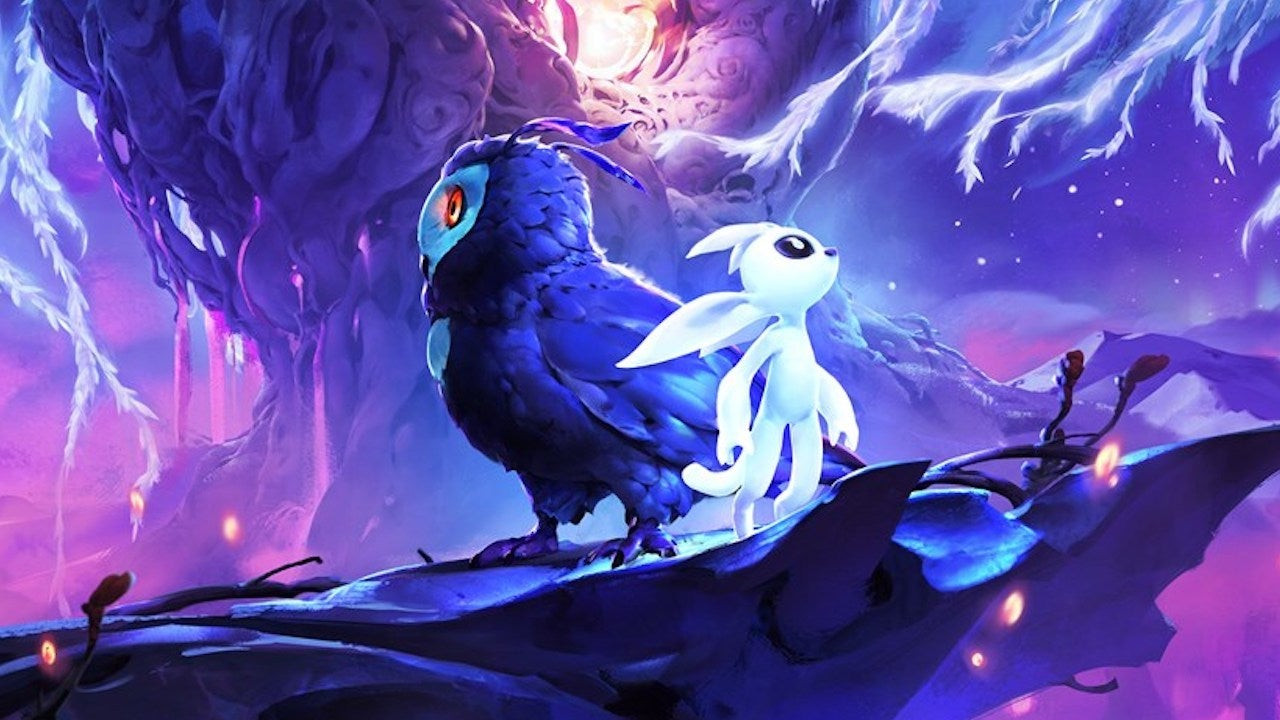 Ori and the Will of the Wisps extends the impressive legacy of the original Ori game, with similarly stunning visuals, controls, and level designs.US Street Price$29.99

While Microsoft is still mostly known for mature, realistic games starring space soldiers and sports cars, every so often the company takes a stab at creating the kind of family friendly, mascot-driven platformer that defined Nintendo’s rise to power 30 years ago. 2015’s Ori and the Blind Forest was its most successful attempt in years; this sidescroller wasn’t just a cute little romp, but rather a genuine achievement in storytelling and artistic direction. The game was so special and singular that a poorly conceived sequel would only diminish the original’s charm. Fortunately, Ori and the Will of the Wisps is a fantastic follow-up and an Editors’ Choice PC game, establishing Ori as one of Microsoft’s best franchises.

Ori and the Will of Wisps takes place after the events of Ori and the Blind Forest, with lovable guardian spirit Ori facing new dangers in new lands with new friends. Even though I played the first game, it unfolded with such fairy tale abstraction that I’m not even sure I could explain the events well enough to spoil them. This isn’t a complaint, since Blind Forest’s sylvan ethereal unreality helped create an engrossing environment.

Will of the Wisps, on the other hand, focuses more on narrative elements, with more characters to talk to and more lore to absorb. A sequel, by its nature, can’t capture the elusive originality of its predecessor, so taking the time to expand the world makes a certain amount of sense. But more detailed backstories weren’t exactly what I was looking for out of this series. It slightly kills the vibe. I would’ve preferred to see the game prioritize feelings and mysteries over story, however heartfelt that story might be.

Fortunately, the superfluous story takes little away from the strengths of Ori’s core presentation, which are as abundant as ever in this sequel. Backgrounds are dense, lush paintings that live and breathe like scenes of nature. Motion smoothing adds a dreamlike quality to the animations, too. Ori’s aesthetics are far more impressive than what you’ll find in other arbitrary platformer levels. They heighten the emotional arc of the gameplay. After getting through early hours spent in dank caverns and treacherous woods, finding peace in a rustic autumn village full of friendly new faces feels like a welcome respite in your own journey, not just Ori’s.

The music begs you to connect with the spirit of the Earth, man. Instrumental tones sound as organic in this world as the patter of the raindrops. Whenever Ori cleanses a new shrine, the harmonious chanting feels like it’s cleansing your soul at the same time. 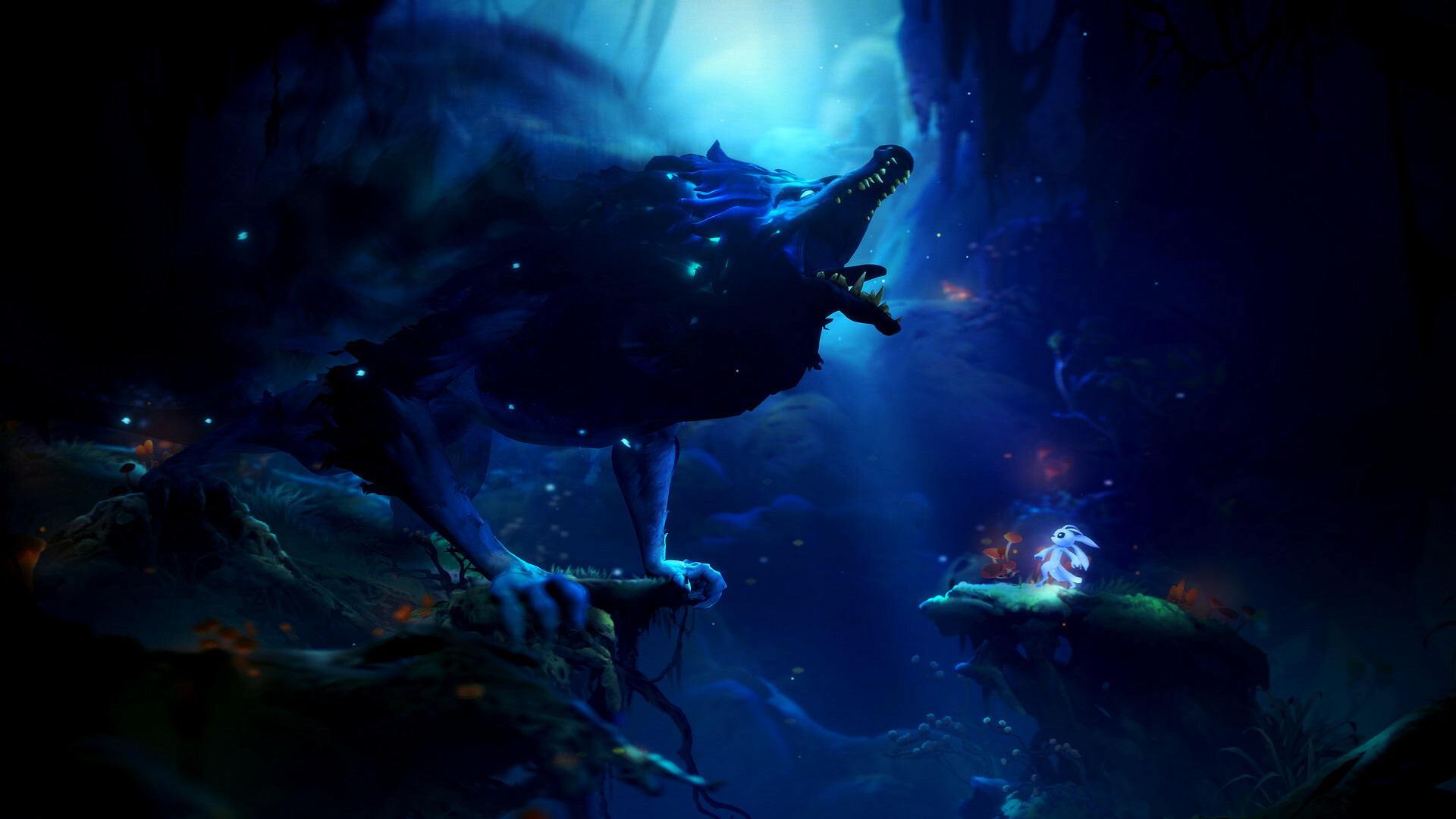 The perfect feel of Will of the Wisps’ gameplay mechanics are what makes it a great game and not just a stylish screensaver. Ori, the player-controlled character, darts around expansive environments like a little mouse or cursor made of light. Movements are marked by a similarly satisfying feeling of weightlessness and precision. Whether clamoring up walls or hopping from tree to tree, Ori consistently responds with an immediacy and expressiveness that feels natural. This was the case in the first game as well, but it’s still a huge achievement.

As with the first game, Will of the Wisps needs these precise controls in order for its challenging jumping puzzles to actually be fair. In the game, you quickly acquire extra movement abilities like double jumping, air dashing, and bouncing yourself off of enemy projectiles. You’ll frequently need to read a room and figure out how to string your skills together to make it through. With controls this faultless, failure can only ever be your fault, thus making victories that much sweeter. Ori’s movements feel so good that even the standard backtracking of this exploratory, nonlinear, Metroidvania-style game doesn’t drag nearly as much as it could have. I enjoyed using my skills to race through previous environments as fast as possible. The new Spirit Trials explicitly challenges you to such tasks. 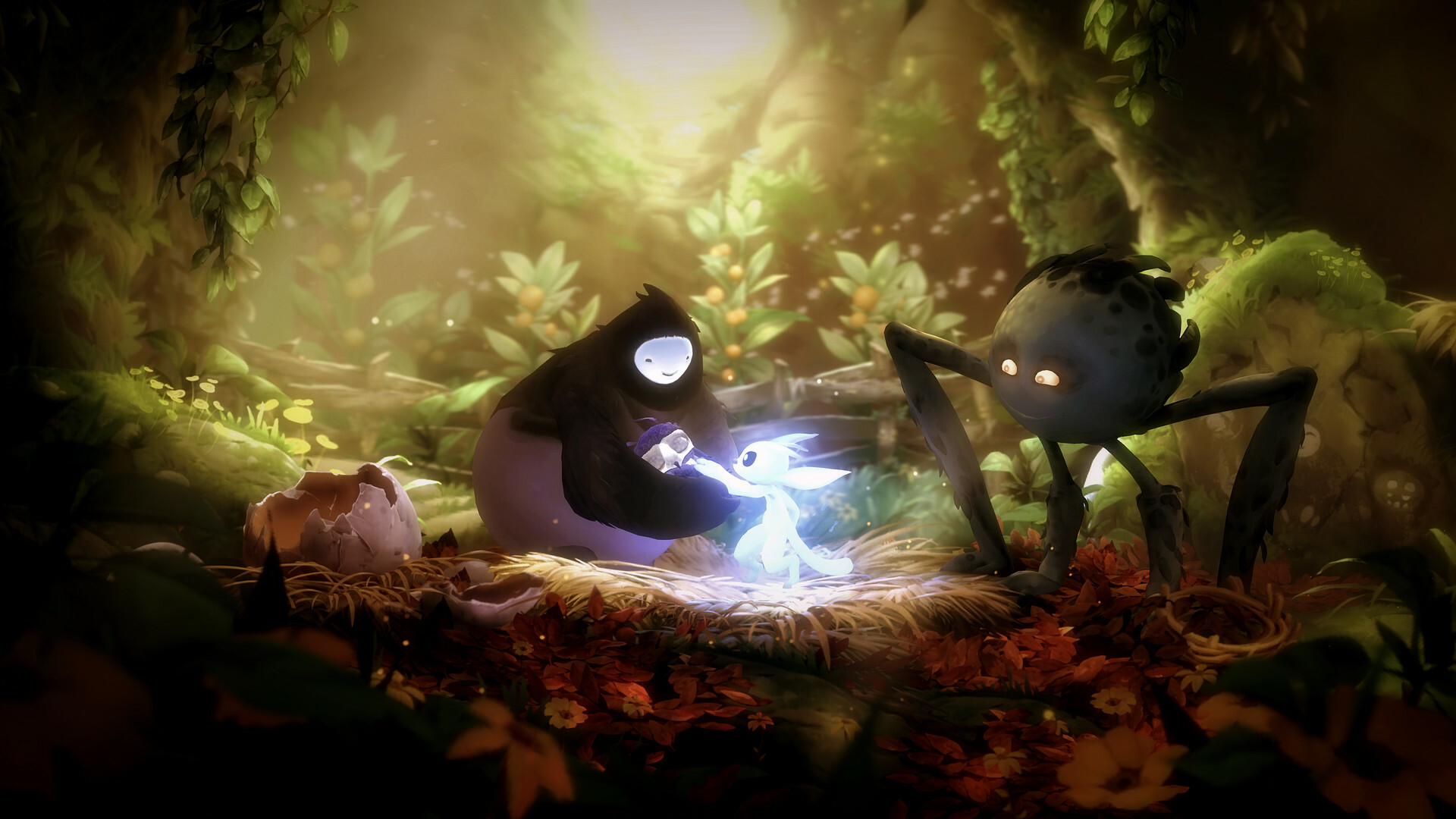 Of course, gorgeous graphics and capable controls can’t stand alone as a game. Will of the Wisps is basically what I expected from another Ori game, namely a visually stunning trek through the forest with challenges worthy of its peerless controls, but those are pretty high standards. The inventiveness of the game’s level designs. Many did not have obvious solutions and they really required me to use my brain or perform sick aerial jumps to move forward. Areas also rarely outstay their welcome, offering tight and twisty, but digestible, gauntlets to chew through. I never became hopelessly lost.

One of the folks who joined developer Moon Studios for this project was Milton Guasti, creator of Another Metroid 2 Remake before Nintendo shut it down. While we can only speculate as to how much influence Guasti had, exactly, parts of the game definitely have the spirit of an ambitious (and well-budgeted) fan project trying to outdo Nintendo at its own Metroid game.

The most noticeable, and most appreciated, improvement to me is Will of the Wisps’ added flexibility. It starts with small tweaks. In the original game, you had to spend energy you gained to create custom save points. It was a neat idea in theory, but needlessly inconvenient in practice. I felt the game should just autosaved before its trickiest jumping sections. The sequel does just that.

A more substantial change is the new Hollow Knight-esque Shard system that lets you customize your loadout with certain abilities. Some of these skills are mandatory, such as a bow and arrow for shooting and activating faraway platforms. But others just mix up your combat options. Instead of a fast blade-like weapon, I prefer a big hammer. Not only does it absolutely crush bosses with tricky patterns, but swinging it in the air gives a little extra lift that make it feel almost like cheating when making big jumps. Your playstyle and loadout might vary, especially if you take on different side quests and wind up with different resources for purchasing upgrades. It makes me want to play again, but in new ways. 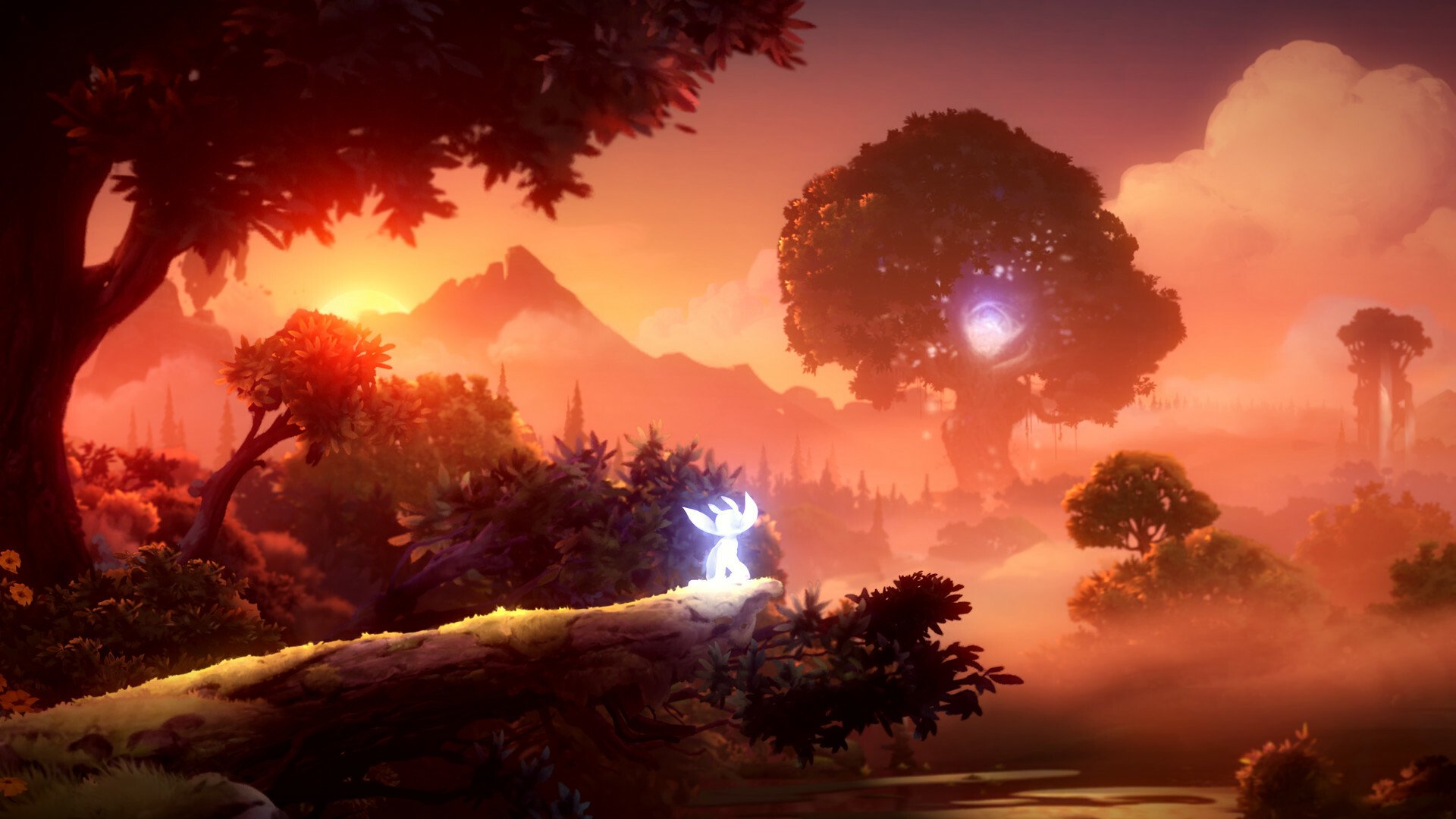 It’s a little concerning when a 2D platformer (a genre which is not typically resource intensive) suffers performance issues, especially considering the first game runs fine on the relatively modest Nintendo Switch. But given the sheer complexity of the visuals and the size of the interconnected map, I understand why the performance dipped under 60 frames per second (FPS) in some sections. I tested the game prior to any patches, but Microsoft has already announced a day-one patch addressing these hitches that mostly plague the console version anyway.

You can mainly avoid performance issues by making sure you meet the game’s recommended specs (AMD Ryzen 3 or Intel i5 Skylake processor, 8GB of RAM, Nvidia GTX 970 or AMD RX 570 graphics card). I tested the game on an aging HP Envy 17 laptop that barely passes that bar. The game is available on Steam, but buying the PC version directly from Microsoft gives you the console version as well thanks to Xbox Play Anywhere. The game takes up about 10GB of installed space. I’ve talked at length on the importance of Ori’s controls, and even on PC I found the Editors’ Choice Microsoft Xbox Elite Wireless Controller Series 2 much more comfortable than mouse and keyboard.